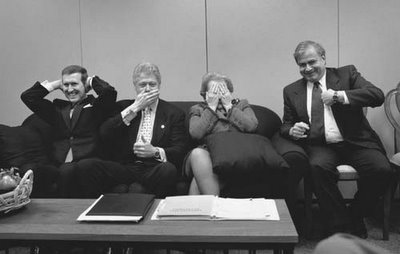 What is former President Bill Clinton doing while President Bush is taking heat for "domestic spying"? I haven't heard or read any comments from him. I have read that the Clinton administration vehemently defended the right of the executive to conduct warrantless searches as one of the president's war powers. Why can't the the Clinton crowd come out and say they agree with the administration on this point? After all, Hillary may be the next president to need such powers to protect the nation, if all goes as planned for the Democrats. Here's what I think. The Democrats are so profoundly unprincipled that they would rather see Bush impeached for a policy that they previously and presently support than speak the truth. Either that, or they really would throw our national security to the terrorist dogs! Whatever the case, they are desperate to find a decent principle they believe in and despicable for their silence on this matter.
Posted by The Western Chauvinist at 1/09/2006 2 comments:

It's the Demography, Stupid

This is such an important, but lengthy piece by Mark Steyn, published in the Wall Street Journal's Opinion Journal today. I hope you can access it at the link, but you may need a subscription. Whatever your ideology, I recommend a subscription to the WSJ Opinion Journal if you truly want to know what and how conservatives think.

The gist of the article is that, while we Westerners are busy worrying about expanding our government services and regulations to ensure a "living wage" and "universal healthcare", our culture is being overcome by demographics. The "replacement" minimum birth rate of 2.1 children per woman is narrowly met in the United States (2.07), but is half that rate in countries such as Spain and is under 2.1 in virtually all the Western or westernized countries such as Japan. On the other hand, Muslim countries have rates well above 2.1 - some as high as 6+. This isn't even about race or religion, as some on the left will accuse us conservatives. This is all about culture. Over 60% of Muslims in the UK would like to live under Sharia law. If you are a feminist interested in preserving your "right" to an abortion, you do not want to be living with the cultural elimination of the West as these demographics foretell.
Posted by The Western Chauvinist at 1/04/2006 No comments: