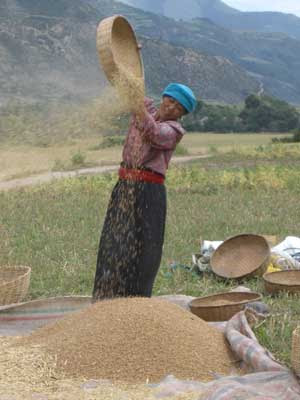 It is a beautiful word, isn't it? Say it out loud. “Winnowing.” The act of separating the grain from the chaff, wherein the fruits of labor are sifted from the waste. The harvest is gathered and purified giving sustenance now and seeds for the next season. Gathered. Separated. Purified. A person unfamiliar with the term would never guess the underlying struggle, even violence, from the sound of the word: winnowing.

I haven't studied prophecy as some of my friends have. I'm such a baby Christian, my sword is more like a jabbing toothpick at this point – annoying, not dangerous. However, I know the prophets speak God's truth, especially to those who would rather not hear it. The truth we don't want to hear, perhaps particularly in the Christian churches, is God is winnowing.

This isn't just about faith. I find more and more that faith and politics intersect: the 2008 election, the economic crisis, the Notre Dame scandal, the “torture” debate, same-sex marriage, stem-cell research, abortion, environmentalism, nuclear proliferation, Israel, terrorism, and on and on. The wind is blowing. Where do you sift out? Do you have the weight to fall with the other ripe, fruitful, life-sustaining grain? Or are you carried away on the wind because you are simply too enlightened a person to land in the heap?

I recently had an opinion published in the local Catholic paper. It has been a humbling experience. My opinion was heartfelt and impassioned, but I exploited a man's article to make my point and exaggerated my certainty to leave no room for argument. I still think the foundation of my opinion was correct – you must choose sides and should do so in good faith, not out of moral vanity - but my method wasn't very Christian. I regret.

And oddly, in that regret, I find substance. Living a Christian life is nothing if not struggle. If, in every interchange of significance, you're asking yourself, “what would Jesus do?”, your life isn't easy. You have many failures in a single day! And you find yourself praying for the Holy Spirit to just “possess me, man!” I need some serious help here.

Yet that constant self-assessment against such a high standard must eventually teach us something. I think it gives us heft. Why is Notre Dame honoring Barack Obama so scandalous to us? It is because the Church must stand for something separate from the culture that elected and celebrates the most anti-life president this country has ever known. Why do we think the previous administration did the right thing when it water-boarded three terrorists? Because it saved thousands of innocent lives. Would I be willing to perform water-boarding on a terrorist and risk the wrath of God? It is a moral struggle I'm willing to take-up for the sake of protecting innocent lives. Yes. And “yes” to giving gays all the dignity they deserve as human beings made in God's image while keeping marriage separate for one man and one woman. And “yes,” bury nuclear waste in my backyard! And “yes” support and defend the only nation in the Mideast where freedom of speech and religion prevail and all people are equal under the law – Israel – even if it means bombing Iran. Winnowing. Are you ripe with the weight of your ideas? Have you engaged in the struggle with morality and therefore, with God? Have you considered and reconsidered? Or do you hold a position mainly because it supports the lightness of your being?