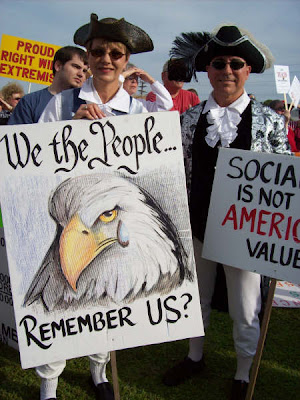 I'm fasting from the internet during Lent. But before I retreat from the e-world I just have to make an observation about American character and the Tea Party movement.

Americans want to take care of themselves and their families. We believe in the dignity of work. We're also very compassionate and realize how lucky we are to live in this country, so we're very generous with the remains of our earnings by caring for those less fortunate, which includes pretty much everyone outside the western world and some within it. We've come to expect ingratitude for our efforts, but it doesn't stop us from doing the right thing. I think this is both because of our religiosity and our deep gratitude for being the lucky ones. These values are in contrast to much of the developed west where people expect the state to take care of them and others and are therefore most concerned with an easy life and on which beach they'll have their next holiday.

These American values are what make us a center-right country. When Thomas Frank goes looking for Republican bogeymen in the Tea Party movement (The Tea Party Movement is No 'Great Awakening' - WSJ), or when Evan Bayh says the government is failing to help Americans lead the best possible lives, they show their ignorance of these essentials of American character. We believe the best government is that which least interferes with our ability to care for ourselves and others – as individuals. In America – the individual has the freedom to be a Giant. This is not true in the social democracies of Europe and other westernized countries. The state is the giant and the individual is therefore made small. "The bigger the government, the smaller the citizen." - Dennis Prager

This is what the Tea Party movement is about. It really is an offshoot of the first American Revolution. “Don't tread on me.”

Reagan said it best: "Government is not a solution to our problem, government is the problem."

Here's one more parting thought of my own...

Political corruption is not the product of campaign donations – it is the product of the power to confiscate and spend the taxpayer's money on one's political cronies and pet projects. This is what necessitates the smallest weakest government possible.

God bless America and her Tea Party Patriots.
Posted by The Western Chauvinist at 2/16/2010 4 comments: