The Wall Street Journal published an interview with Tom Wolfe this weekend. Here’s a sample:

"I really love this country. I just marvel at how good it is, and obviously it's the simple principle of freedom. . . . Intellectually this is the system where people tend to experiment more and their experiments are indulged. Whatever we're doing I think we've done it extremely, extremely, extremely well." Silence. "These are terrible things to be saying if you want to have any standing in the intellectual world."

Amazing that Jay Bennish and Ward Churchill would have a happier meeting of the minds with the intellectual elite than Tom Wolfe, isn’t it?

Wolfe is a true patriot who manages to make legitimate and searing criticisms of his country. He has a “death-clamp on the American Zeitgeist” and so can honestly expose the repulsiveness of the celebrity culture (“Bonfire of the Vanities”) and the hyper-sexualization of college campuses (“I Am Charlotte Simmons”). He says:

"I Am Charlotte Simmons," particularly in its notice of the coarse sexuality governing campus life, is a book a liberal would never write, as corroborated in the many negative reviews: "'Oh, big deal, they're having sex in college, yawn, yawn, what a surprise,'" as Mr. Wolfe puts it. "I do not disallow the possibility that they just didn't like it," he continues, but he was frankly taken aback by those who took it "as a counterrevolutionary attack on the sexual revolution. . . . Then it really dawned on me that so many people are proud of the sexual revolution, you know, 'We freed ourselves from those damned religious people and this Puritanism.'" "At least in the story," he pains to note, all this "has a very deleterious affect on a very innocent albeit egotistical girl -- and that's I think what's there." Sign of the times, I suppose, when you're considered conservative for exploring the very real consequences of cultural change.

Isn’t it refreshing to hear a criticism of America that has nothing to do with Enron, Halliburton, CO2 emissions, racism and imperialism? And I find it so much more credible coming from someone who has a deep and abiding love for his country:

"I also believe in the United States. I think this is the greatest nation that ever existed, still is. It's really the only really democratic country in the world. Find me one country, just one country in the entire world that would let a foreign people -- different culture, different language, and in many cases different color than the majority of the native stock -- take over politically an entire metropolitan area in less than one generation. I'm talking about the Cubans in Miami . . ."

I doubt that Mr. Wolfe would label himself conservative, but the following certainly exiles him from the liberal camp:

George Bush's appeal, for Mr. Wolfe, was owing to his "great decisiveness and willingness to fight." But as to "this business of my having done the unthinkable and voted for George Bush, I would say, now look, I voted for George Bush but so did 62,040,609 other Americans. Now what does that make them? Of course, they want to say -- 'Fools like you!' . . . But then they catch themselves, 'Wait a minute, I can't go around saying that the majority of the American people are fools, idiots, bumblers, hicks.' So they just kind of dodge that question. And so many of them are so caught up in this kind of metropolitan intellectual atmosphere that they simply don't go across the Hudson River. They literally do not set foot in the United States. We live in New York in one of the two parenthesis states. They're usually called blue states -- they're not blue states, the states on the coast. They're parenthesis states -- the entire country lies in between."

He also has this to say about the internet: "Using the Internet is the modern form of knitting," he continues. "It's something to do with idle hands. When you knitted, though, you actually had something to show for it at the end. So on that note, I’m off to do something productive! Blog on – if you dare!
Posted by The Western Chauvinist at 3/12/2006 2 comments: 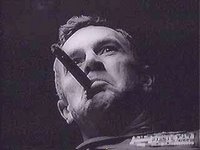 When I was a lefty, I thought conservatives concerned about Soviet expansion who saw commies under every rock were conspiracy theorist wackos akin to flat earthers and fluoride hysterics. Now I think lefties are conspiracy theorist wackos who see “big oil” and “Walocaust” as the underlying motivation for everything, including the liberation of millions in Afghanistan and Iraq. When lefties worry over American imperialism, they’re really worried about a Wal-Mart being built in downtown Baghdad. Scary!

Do you know the Jewish interpretation (according to Dennis Prager) of the commandment: “Thou shalt not take the name of the LORD thy God in vain; for the LORD will not hold him guiltless that taketh his name in vain”? The Hebrew translation is “Thou shalt not carry the name…” which Jews believe means that you should never commit acts of evil in God’s name. I wonder how the Islamists interpret it.

Did you read Peggy Noonan’s piece about the Oscars and George Clooney? She really nailed it! George got a little information (very little) about the McCarthy era from the media (or friends who got their information from the media) and made a movie based on it. It turns out George’s viewpoint on the subject is naïve, simplistic and stupid. Imagine that! Good night, good luck, good riddance!

How ‘bout that “port scandal”? I was really outraged when I heard we were selling our ports to the UAE. Since then, I’ve learned a little and even though I still know very little, apparently I know more than most congressmen. For instance, I now know that foreigners don’t own our ports, but mostly foreign owned companies run operations at our ports, including the communist Chinese. We were probably at greater risk of having terrorists infiltrate the British owned company that sold to the UAE than we would have been with UAE ownership. Have you seen some of the protests in Britain over the cartoons? I’ve also learned that the UAE has been a good ally since September 11 and even has made Dubai a port-of-call for our navy! This country is trying to modernize and liberalize and we just spit on it. This incident will be all the worse if anyone makes any political capital off of it. 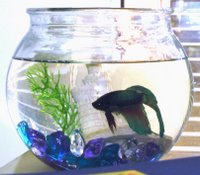 Have you ever owned a beta (Siamese fighting fish)? They’re really inexpensive, interesting, low-maintenance pets. For about ten dollars you can get the whole set-up: vase, decorative rocks, plant, food and fish. We have two in separate bowls (they’ll kill each other in the same bowl) and like to watch them “fight” by putting the bowls next to each other. I like to get a “fish-eye” view by looking through one bowl into the other. No wonder they get all worked up! The distortion made by the bowl makes the other guy look huge!

When are we going to start bombing Iran? No – really. The suspense is getting to me. Despite the liberal characterizations of us as bloodthirsty warmongering idiots, I really was not happy to see the build-up to the Iraq war. I wasn’t at all sure we were doing the right thing and I didn’t want conservatives to have to suffer the political consequences. Now I fully support the war there and I know, intellectually and morally, that we are doing the right thing. But, this Iran deal is making me unhappy in a different way. We simply cannot – CANNOT – let Iran go nuclear. This just seems such a no-brainer to me and we now have staging positions all around Iran. Let’s get busy! It just seems way too close to too late.

Do not see “Doogal”. It is a weird kid’s film about a dog and his friends who try to save the world from a deep freeze brought about by the escape of an evil spring loaded wizard. Unfortunately, although the message is supposed to be about teamwork and friendship, it gets lost because the title character has no redeeming qualities (indeed, his fetish for candy brings on the whole crisis). Even his loyalty to his owner is self-serving. The producers seemed to try to salvage something for the adults by showing outtakes of the actors doing the voices during the credits. Since Whoopie Goldberg and Chevy Chase are among the “talents,” that pretty much drove the last nail in the coffin for me.

Do you know why Islamists believe they’re going to be given 73 virgins if they blow themselves up? It turns out Muslims have defined heaven as the place where they get to indulge in all the impure acts that are forbidden on earth. If they sacrifice themselves for Islam, they get lots of sex and can drink from the rivers of wine that flow in heaven. Stunning, isn’t it? It seems so ass-backward to us Westerners. But it explains a lot when you think about those young sexually repressed men who are taught that their bodies and all they naturally desire are impure. They are also chosen at birth by their families to be martyrs for the faith. These families actually celebrate their hideous deaths because it helps the rest of the family get to heaven! I learned this from a French film producer on Dennis Prager’s show. He has interviewed jailed Islamists who failed at suicide bombings and the families of successful suicide bombers. He’s made a documentary called “Suicide Killings” which is due out this summer.

Something else I learned on Dennis Prager’s show… did you know the story of Adam and Eve is really a powerful lesson on our need for each other? I certainly never thought of it this way until Dennis explained what an evangelical minister taught him. God saw Adam’s discontent and recognized that even He was not enough for Adam! Adam needed a human companion and so God provided Eve. Isn’t that a wonderful thought?! God knows we need each other and He provides!

God bless and keep blogging!
Posted by The Western Chauvinist at 3/10/2006 1 comment:

NRO's Jonah Goldberg has written a scathing review of "Crunchy Cons" by Rod Dreher. I've only read to page 14 of the book, but I'm pretty sure Jonah has nailed it! I'm a reformed granola lefty, so I recognized Dreher's characterization of conservatives (the conventional non-crunchy kind) as greedy materialists for the insult it is. I also know Dreher is right about ugly shoes being more comfortable and organic produce being yummier. But, as Goldberg asserts, footwear and grocery shopping habits do not a new movement make.

If Dreher is right about the Godless greedy materialist nature of conventional conservatism, how does he explain all the average and low-income Republican voters (by far the majority)? It drives Liberals nuts that these people "vote against their interests" (why don't they loot the treasury like us Liberals)! And what about the statistics that reveal charitable giving is markedly higher in the red states and particularly in the poor Bible-belt states of the South? What about the fact that Republican donations are primarily from small donors where Democrat donations are primarily from large corporate donors?

I'm afraid Dreher's narcissism has caused him to lose sight of what conventional conservatism is really about: “Classical liberals root their case for laissez-faire in the autonomy of the individual, the primacy of freedom, the faith that virtue not freely chosen isn't virtuous, and in a deeply religious conception of the individual conscience (another sorely missing voice in Rod's book is Michael Novak, the world's leading authority on the intersection of market economics and Catholicism).” Wearing comfy shoes and wanting to eat fresh organic produce doesn’t make you a Liberal. But, believing these acts are morally superior can sure lead you down the Leftist path.
Posted by The Western Chauvinist at 3/02/2006 4 comments: