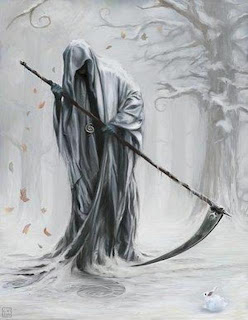 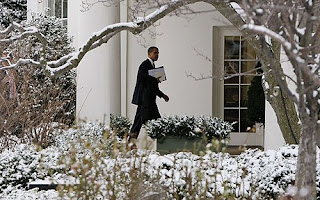 You know how we live most of our lives in denial of death? Most of us have entirely accepted the idea of our mortality intellectually. But, we don't spend any significant amount of time thinking about it because part of us knows it will ruin our lives, right here, right now. I think this state of denial is a gift from God and who am I to turn it down? Since reverting to Catholicism, I've got some of that weird "at peace with death" thing going on, but that's a discussion for another time.

What I'd like to address now is something strange I've experienced since Obama became president. I'm not talking about since he was elected. I think I actually had a decent grip on reality at that point. I was resigned to the fact and still hoped, with lots of skepticism, he might surprise those of us who were convinced he was a hard-left radical with no proven leadership ability. It's confirmed - I was right to be skeptical. But, this is different. What I'm experiencing now is a post-inaugural defense mechanism.

My sister says she keeps thinking she's going to wake up from this nightmare. I can relate, but I realize now my state of mind is something more like how I handle death - or more accurately - how I live as if death isn't my ultimate end. Intellectually, I know our president is a sanctimonious poseur. And I also know we'll be lucky if the effects of who he is are merely devastating and not globally catastrophic. But, psychologically, my mind refuses to deal with the fact that this man goes into the Oval Office everyday when he's home from his latest apology tour and "rules the world!" I just don't go there. Yes - I read the news and listen to the arguments on talk radio. But, the only way I maintain my sanity is by processing this presidency as if it were an extended season of The West Wing. The Obamas live on a set which strongly resembles the White House. It simply can't be the same space recently occupied by the manifestly decent Bush family and before them some of the great leaders of our great and beloved nation. The Obamas travel the world meeting heads of state in the way Queen Elizabeth serves as a figurehead for Great Britain. It is all a very pleasant visual (for some), but without significance. There is an unreality to it and that's just fine with me. I'll deal with it when I absolutely have to - like death. Until then STUFF... IT... IN... THAT... BOX! And whatever you do - don't let it out. It could ruin your life.

P.S. The only time I experience a breakdown is when I consider what a betrayal his election is to our military. Aaaargh!
Posted by The Western Chauvinist at 4/22/2009 2 comments: 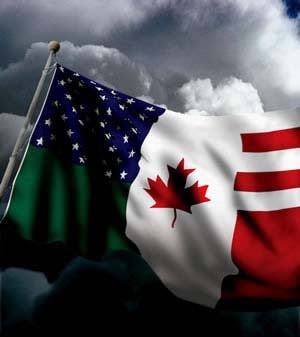 All the 9/11 terrorists, of course, entered the United States directly from overseas. The notion that some arrived via Canada is a myth that briefly popped up in the wake of the 9/11 attacks, and was then quickly debunked.

Informed of her error, Ms. Napolitano blustered: "I can't talk to that. I can talk about the future. And here's the future. The future is we have borders."

Just what does that mean, exactly?

Perhaps Ms. Napolitano isn't in on The Plan. She doesn't know her job protecting the borders is temporary, pending the One World Order lead by our Dear Leader, The One. Get it, Janet? The One.

Psst. Don't tell the Canadians. They seem a little tetchy about it.
Posted by The Western Chauvinist at 4/22/2009 1 comment:

Response to Reporting on Your Tea Party

I sent the following to my local paper, but I figure it probably applies to reporting on the tea parties nationwide. Feel free to copy anything you'd like to say to your local paper. I doubt any of them will be put into print, which is why I'm posting it here. Names have been changed to protect... me.

Thank you for your “report”, and I use the term loosely, on the local tea party rally Mr. Smith. We now know where you stand: firmly beside record deficit spending, which I'm guessing you decried during the Bush administration. How about a little perspective from inside the rally?

I was there and I saw two large “Don't Tread on Me” banners, not nearly enough to “outnumber” the American flags, one of which I acquired on my way into the park from people handing them out. Yes – there was talk of “righteous anger”, but contrary to the implication of your “report”, this was the most self-controlled, even good-humored, “angry” mob you'll ever see. When I was looking, the local police had their backs to us, suggesting they were more concerned about disruption from outside the tea party than from within it. The attendees were from every age group, with the majority being middle-aged, middle class Americans like me. Clearly, many of them had taken a break from work to attend as indicated by their business attire. Many others were, like me, representing our families who could not attend because they were at work and school.

Your suggestion that we were there to “rail against stimulus spending, budget deficits, mortgage relief and efforts to right the banking system” is creatively worded. You've learned well at the feet of the master, President Obama. Set-up that straw man and then bash it to pieces. Conservatives – or those of us “on the red end of the political spectrum” (more creative wording) - don't believe the government should do nothing in response to the financial crisis. We believe a tax holiday for individuals and small businesses would be incredibly stimulative. We don't believe individuals or corporations or governments overcome a debt crisis by going trillions of dollars into debt. Do you? We believe in consequences for bad behavior and poor decision-making and therefore, yes, we are against “mortgage relief” (taxpayer bailouts). We see two possible choices in the effort to “right the banking system”. First, relieve the banks of their toxic assets (which might, eventually, lead to a return on the taxpayers investment as it did for the RTC). Second, let the banks fail (which is bad for shareholders, but not so bad for taxpayers and depositors insured by the FDIC). The Obama administration is choosing to do neither. His plan is to prop up these zombie banks (not my original creative language) with taxpayer money for as long as... is there an end game? How does that plan sit with you and your children and your grandchildren? I admit, it makes me angry.

Shame on the editorial staff for letting Mr. Smith's blatantly biased “reporting” be printed anywhere other than the opinion page.