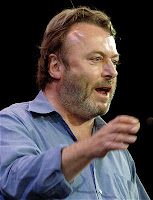 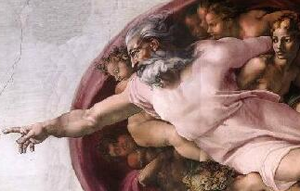 Somehow I can't bring myself to believe my dog imagines me on all fours running for the food bowl at 5:00 pm every day or tearing out the patio door to chase a squirrel. However, I am delighted by the thought of my Pembroke Welsh corgi reclining in a tufted leather chair dressed in a paisley smoking jacket, reading glasses poised jauntily at the end of his long nose, with a pipe in one paw and a copy of G. K. Chesterton's Orthodoxy in the other. Christopher Hitchens prefers to believe that this human-animal distinction – this ability to imagine – is an accident of mutation over eons of evolution. What, exactly, is adaptive about my Alistair Cooke corgi fantasy, I can't, well... imagine.

I believe this distinction is explained by our Creator God who imagined and spoke us into being. We, not other animals, are made in God's image and likeness and therefore, we have this ability to imagine and, as such, are often capable of reflecting God's creative enterprise. Thus, an Alistair Cooke corgi nearly out of nothing.

I love Christopher Hitchens and I'm not just saying that to establish my Christian bona fides. I really do. What I see in him is a righteous indignation about the suffering of innocents. I deeply admire his commitment and passion to his cause. He's willing to get his nose bloodied over it and even put his own life in danger. I find this very attractive and heroic. It doesn't hurt that Hitchens has one of the sharpest minds of our era and is a master of the English language too.

Where Hitchens fails, however, is pride (it's always the pride, isn't it?) in his ability to reason. He cannot imagine how a good God could allow such abject misery and suffering in the world. And therefore, he rejects the very notion of God.

The Christian response to the paradox of a God who desires mercy and yet allows evil into the world is often answered by “evil is allowed to enter to reveal the glory of God.” This isn't the most intellectually satisfying response, is it? The best I can do is the old Jewish saying, “if I understood God, I would be him.” Both are inadequate to a man who rests all his understanding of the world on evolution and reason.

I like to imagine an omnipotent corporeal God with a restraining hand on Christopher Hitchens' forehead while the lesser, still beloved and magnificent creation, Hitchens, flails away with all the indignation he feels at injustice in the world, trying to land one good blow to make his point. If I can feel this way about a man I've never met and with whom I have profound philosophical disagreements, imagine how much more the Father, who sent his only Son to die for us all, must love and cherish such a man.
And so, I pray, Lord, if it be your will, please save Hitchens from his pride and his sickness. After this lifelong struggle, let his hand come to rest on Yours so that he may know Your Presence and make him an example, like St. Paul, of the good that is possible when we imagine You.
Posted by The Western Chauvinist at 12/26/2010 7 comments: