A Couple of Laughs 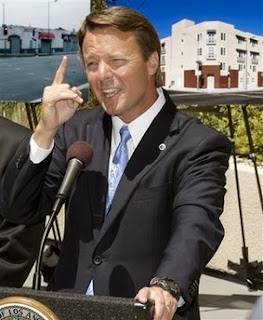 I just had to share a couple items that made me laugh.

Did you hear the one from the Enquirer about John Edwards meeting with his mistress and love child at a hotel? OK - I don't get my news from and I'm not a fan of the tabloids, but the piece linked on Drudge about catching Edwards "in the act" was pretty convincing. Sounds like there were lots of witnesses and he didn't handle it well. Well Slate published a piece asking why the story wasn't getting MSM press attention, especially compared to the Larry Craig bathroom shenanigans, and here is the conclusion of the author:

Or are they observing a double standard that says homo-hypocrisy is indefensible but that hetero-hypocrisy deserves an automatic bye?

When I read the words "double standard" in the subtitle of the Slate piece, I thought, wow, Slate is really coming around if they can be honest about this. Boy was I wrong! No, the difference in coverage of Edwards and Craig isn't that one is a Republican and the other a Democrat former presidential candidate who also happens to be on Obamessiah's short list for VP. NO! It's homophobia in the press! Riiiiight. 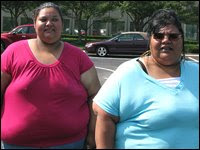 And this other is a real beauty from NPR (thanks to American Digest). NPR is profiling an extended family in Ohio that is out of work and lacking transportation to help them get work. Apparently without any sense of irony, the NPR piece falls under the title "Feeling the Economic Pinch; Struggling in Ohio as the Economy Tightens". That isn't the only pinching and tightening these poor folks are feeling! As Vanderleun says, "obviously this works better as radio".

Seriously though, this is an iconic image for what government dependency in America looks like. These people didn't start eating starchy diets when the price of gas and food went up.
Posted by The Western Chauvinist at 7/24/2008 4 comments: