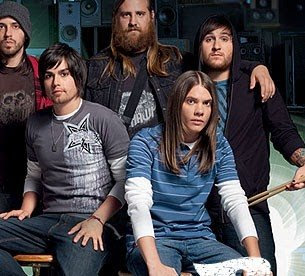 If you had to guess, what would you say was the subject of the above picture? I'll make it easy with multiple choice:

a) Is it an artsy class picture of hip high schoolers?

b) Is it an anti-smoking pitch?

c) How about the latest “boy” band?

Aw – you noticed the speakers in the background and the guy on the right holding drumsticks. But you're still wrong!

This is a “back to savings” (you know – like, back to school, Dude) advertisement for young men's clothing from a respectable department store. Does clothing still make the man? If so, what are these supposed high schoolers made of with their long tresses, facial hair and tattoos? I don't even want to think about the unseen piercings (made you think about it, didn't I?).

I'll be called a throw-back – a primitive – for this kind of critique, but here goes. Did you know there's a biblical prohibition of tattoos? Someone with more time or more biblically versed than I can provide the chapter and verse. You'll ask, “What is the significance to today's life? That is so before last millennium!”

Here it is. Most Americans – even Americans of faith – have no idea where they come from. What makes an American an American or a Christian a Christian or a Jew a Jew? Greater minds than mine (Natan Sharansky, Victor Davis Hanson, Dennis Prager, et al) have noticed there's a war on identity going on, but I'll add my voice to the chorus.

The biblical prohibition against tattoos was, like Judaism in general and Christianity by extension, a reaction to the decadent cultures Jews rejected for ethical monotheism. Judeo/Christian values reject the death culture of ancient Egypt, the sexual deviance, in the form of pederasty and homosexuality, among ancient Arab and Greek cultures, and yes – even the tattooing of the ancients. But, you wouldn't know it even at my Catholic parish where recently the mother and godmother of a baby being baptized sported tattoos between their shoulder blades. I suppose I should be grateful the young couple was having their baby baptized into the faith. And yet...

How can a culture be sustained when the values that got us here are no longer recognized by most people – even the people that claim some allegiance to the institutions that represent those values? How can a Catholic profess to be a Catholic and vote for Obama, who not only defends infanticide in the form of partial birth abortion, but argued against legislation that would protect infants who miraculously survive an abortion from death by neglect. The fight for human dignity is fundamental to being Catholic (recommended viewing: Archbishop Chaput on Uncommon Knowledge). And yet, Catholics are voting for Obama – I know this is happening because it is happening in my own family.

How can a Jew claim to be a Jew and vote for Obama or any liberal when those liberals cancel Sarah Palin's appearance at a protest rally against Ahmadinejad because they are more opposed to Palin than they are the genocidal impulses of Iran's leader?

And finally, will America still be America when President Obama turns us in the direction of secular humanist socialist Europe? He will grow the dependent class. He will stop projecting American power in a misguided attempt to have America loved by the rest of the world. He will promote irresponsibility in the name of compassion as with this subprime mortgage mess. And this grand experiment in liberty will die a redistributive death because of liberal “intoxication with their virtue” (David Horowitz). Expect greater human suffering and death to follow America's demise, but to the true believing liberal, it will be worth it because at least there will be fewer of us human pollutants producing CO2.

Here are Natan Sharansky's words in his interview with Dennis Prager:

“Identity and freedom are not enemies. To the contrary, they must be allies. That if you don't have strong identity, you will not be able/capable to defend your freedom. Identity without freedom becomes totalitarian/fundamentalist. But, freedom without identity is decadent, is weak, is meaningless and that's why I'm against that great dream of John Lennon: imagine the world without religions, without nations; the world where there is nothing to die for. If there is nothing to die for, you will not be able to defend your freedom.”

How do I know? Believe it or not, I read it in Time magazine while at the dentist. Here's a quote from the article:

In the 1880s the british poet and culture critic Matthew Arnold paid two visits to the U.S. to observe the native customs. Eventually he set down his impressions in a book, Civilization in the United States. On the whole, he didn't think there was much. For one thing, he was troubled by the way Americans appeared to lack any capacity for reverence toward superior men. "If there be a discipline in which the Americans are wanting," he pronounced, "it is the discipline of awe and respect."

Arnold was directing this criticism at America's love of funny men, particularly Twain, who he said was "so attractive to the Philistine." Twain had a classic response: "A discriminating irreverence is the creator and protector of human liberty." Time says this was Twain's way of saying "Go stuff your awe." And that is exactly what Sarah Palin said to the elitist American Left last night. Ronald Reagan isn't the only one smiling.