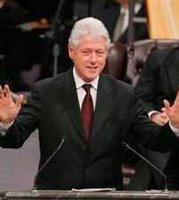 Bill Clinton’s third biggest concern for the world is “culture divide” – or what I prefer to address more directly as cultural conflict. I’ve discussed the absurdity of Bill’s number one concern – “climate change” and the moral vanity of his second concern – “inequality”. Now, “culture divide” is something I can take seriously.

You may expect me to start into a comparison of Western and Muslim culture, but first I have to address the “culture war” right here at home, initiated by liberals like Bill. Liberals very cleverly and with accurate calculation took control of some of the most powerful institutions in Western society in the last several decades, including the academy, the judiciary and the media. These institutions are now controlled by people who do not believe in American exceptionalism. To the contrary, they believe that America is racist, sexist, homophobic and imperialist. They claim to be describing you and me, folks.

Take racism, for example. Conservatives have been trying to credit liberals with success in eliminating institutional racism for years now. Conservatives were slow to take up the civil rights cause (although congressional conservatives voted in higher percentages for the civil rights legislation of the 60s than liberals). This country achieved in relatively short order, although not without pain, the important change of making racism socially unacceptable. Job well-done, liberals!

But, doggone it; liberals simply will not be convinced of their success! Why just look at the “color of the faces of Katrina” (Jimmy Carter at Coretta Scott King’s funeral). As if the tragedy of a hurricane has anything to do with racism! Do you think the faces of Katrina would have been whiter if the storm had struck during the Carter or Clinton administrations? I find it gravely insulting to those Southern white boys seen lowering themselves from helicopters into the cesspool of N.O. after Katrina to literally wrap themselves around desperate black people to suggest racism was a factor. The coast guard was there the first day rescuing people; otherwise Ray Nagin’s prediction of 10,000 dead might have become accurate! The fact that the cameras weren’t there to catch the initial rescues does not diminish the heroism of these men. Don’t you dare call America racist!

And then we hear that the federal response was so slow and the feds knew – they knew for years in advance – that those levees wouldn’t withstand a hurricane of magnitude 3 or above! I don’t buy it – the slow response bit. We all felt desperate watching the residents of N.O. stuck in the heat and humidity on those bridges and rooftops, sometimes for days. But, we also know that the media invented stories of murder and mayhem and now pat themselves on the back for their excellent coverage of the story. C’mon folks! The response wasn’t perfect, but this disaster was bigger than anything America had experienced before. It was a lesson.

How about those levees? Talk about slow response! Bill Clinton had eight years to do something about them and did nothing! And George Bush had a few other important things on his plate after 9/11. I realize the buck stops with the president, but he is neither the mayor of N.O. nor the governor of Louisiana. At what point do the locals bear responsibility for local issues and when do we federalize them?

If blacks suffer poverty disproportionately in America, it is no longer because of racism. Sadly, it is because many have bought into the liberal idea that the government can and should fix their problems. I have become cynical about the Democrats position on race and poverty. Surely the “smartest couple in the world”, Bill and Hillary, know that people’s best hope for overcoming poverty are traditional values that sound like a conservative manifesto: get married before having babies; worship God regularly; get the best possible education you can; work hard. If so, why do the Democrats keep playing the race card and blaming Republicans when blacks suffer? I believe they are intentionally holding blacks down with disinformation, the victim mentality and fake government solutions to try to hold onto power. If blacks help themselves by embracing traditional American values, they’ll see the Democrats as the false friends they are. Black loyalty to Democrats is a way for poor black people to keep rich white people in office – nothing more.

What is the liberal agenda in this cultural conflict? It is virtually the opposite of the values that made America great:

This nonsense is being legislated from the bench, touted in the media and taught in the schools – K through 12 and beyond. It is a miracle that at least half of Americans still have some perspective on what is fundamentally good and right about America… this nation founded on an idea, not geography or ethnicity. This land of the free and home of the brave is worth fighting for… it is God’s gift to humanity. So, keep praying and vote for conservative Republicans! Because, this culture war is going to have to be won at home before it can be won in the wider world.

Great article, but once again we need to stop calling them by their false name Liberals, and call them by what they are "Leftists". Check my two new articles on http://newenglandrepublican.blogspot.com/ thanks

Thanks for the comment Warrior. I understand what you're getting at with the distinction between Liberal and Leftist. Unfortunately, in the modern sense, Liberal and Leftist have become synonymous. Conservatives now hold the classical Liberal position, but I think you're fighting an uphill battle if you want Conservatives to call themselves Liberals and Liberals to call themselves Leftists. I'll be checking out your blog! Thanks.

One of the biggest problems you pointed out was the indoctronation of youth through the public education system, and through the mainstreme media. The Secular Progressive Left tried hard to indoctronate me as a youth, and when I didn't do what they wanted me to do (even though I didn't know what the difference between a conservative, and a any other group was) they called me a racist Nazi homophobe (mainly because I was German in ancestory) I could remember vividly when the first Gulf War broke out when I was 12, I was to young to join the Army but I supported the Soldiers (mostly because I watched star wars-GI Joe cartoons!) My hard-lined leftist teacher said the war was evil, and the troops were exploited workers, and I was a racist since I supported the war against Saddam Hussein. This guy was a class act, for he fled to Canada and Ireland during Nam, and then hated the US government. Much to say alarm bells went off, but then when I went to high school and Bill Clinton came into the national scene I knew something wasn't right. Thanks- Warrior

Western Chauvinist - That was an excellent piece - I found it very coherent. I was web-surfing yesterday and something popped up with a picture of William Jefferson Clinton and I wanted to puke. (Sorry:)
You are right - he embodies - is the personification of - the smug, self-righteous, race-hustling left. I found this quote of interest in a review of the book 'Shakedown':

"Jesse Jackson is the Black equivalent of Bill Clinton. An amazingly talented opportunist who used his powers of rhetoric and charisma to grab power and wealth for himself, only in Jackson's case he had to usurp the Civil Rights Movement to do it. How different might things be today if Jackson had applied his talent and power to an unselfish cause?"

Pretty stunning, huh? These people would be interesting case-studies in warped psychology if the implications for our country weren't so grave.
Bill Clinton - the left - are evil.
Pray and vote and keep blogging!

As you can see in my blog NewEngland Republican, some hard lined Left Winger exposes who he really is through his constant hate mongering, bomb throwing negativity. Every time he throws something at me, or other Conservatives, I nail him with FACTS every time. Thanks and keep blogging!- Warrior

Hey Warrior,
I left some comments on your site. So sorry about your dog. Sorry if I don't keep up, but you are prolific!

I, personally, would disengage from Joe Smoe as he has said in response to my comment that he will not participate in reasoned discourse. I hate to see you waste your time and talent on someone so unlikely to change his mind.

I think the only thing conservatives had going for them in the 60's 70's and 80's was that they tended to have more children than Leftists. Now with Talk Radio, Fox News, and blogs (like this one) I think we stand a good chance of re-gaining our fair share of the power in formerly Leftist-dominated spheres.

I think the biggest hurdles will be in academia and Hollywood. Conservatives don't seem to gravitate towards those careers. They would rather be running a company than teaching students about economic theory, for example.

You said it Hodar. Conservatives are the ones working hard for a living which is why they are busy, unlike many Leftists who are either living on welfare, in a union, or employed in a public school or college system.